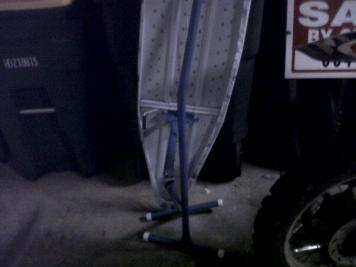 I know.  You’re wondering what in the world this is, or was at least.  Well, it’s my ironing board.  After the weirdest week in recent memory, this is what is has come today today.  A poor, lonely, broken ironing board, just waiting to be tossed into the recycle bin.

It has literally been one thing after another this week.  Let me give you a run-down.

1.  I get an email from someone, telling me that something I turned in 4 weeks ago is now due again in 3 weeks.  Mind you, the first time I turned it in, I received a reply along the lines of “Great!  This is exactly what I needed! Thanks!”.  This time, apparently, the words “great” and “exactly” were being spoken in Klingon, so I was unaware of their alternate meaning.  Silly me.

2.  Our daughter, the glorious cook that she is!, was cooking something in the microwave on Sunday.  I was in the other room.  She called out, “Hey, does this green cup have metal in it?”  I answered, “What green cup?”  She said, “The coffee cup.”  We have about 50 of those, so I asked why she wanted to know.  She responded, “Because it’s sparking in the microwave.”  Yes, the entire rim of said cup was a nice, shiny substance, also known as METAL.  The entire cup was ruined, not a great loss though since we have 49 more, but the bottom was melted.

3.  My Sweetie and I went to lunch on Tuesday.  We were seated outside, in an open area, down the street from the very-busy State Capitol building.  Even not being an eavesdropper, it was clear to me that the lady sitting next to me was interviewing a client IN PUBLIC.  As in a law client.  Tsk tsk.  A very bad representative of my chosen profession.  Too bad I haven’t graduated and don’t do family law.  It would have been an easy win for my side given the information I learned in just 30 minutes.

4.  I went to get my employer-mandated flu shot.  I’m allergic to a portion of the “regular” flu shots, so I have to get a special one.  They are out of special ones.  I go back the next day when they have a “special” one, and my arm has hurt for three days.

6.  I got to the interview.  I waited about 15 minutes.  That’s what I get for scheduling directly after lunch.  I notice that there are no other 3Ls listed, which makes me feel like, “Wow!  They must have chosen me for a reason!”  Not.  About 10 seconds into the interview, I learn that they are only hiring for Fall 2013 and Spring 2014, when I’ll hopefully have graduated.  Funny thing about this is that I am about 95% positive that I didn’t register to see this employer.  I only registered for one, and I know what firm it was with, because I’ve interviewed with them previously.  So…I’m not sure how I got the interview, but I assume because I looked like a complete idiot, they won’t be calling me anytime soon.

7.  One night in class, there was an incredibly smelly person somewhere near me, although I could not determine who it was.  It was so bad that I thought I was going to hurl.  I wished for smelly hand lotion.  I was eating cough drops like they were candy just to make my nose burn from the eucalyptus (to which I’m a bit allergic), so as to not vomit.

8.  I have had the “laughing at inappropriate things” response all week.  I haven’t done this in a very long time, but it honestly feels really good.  I feel like I’m getting a bit more relaxed at work, which is really, really good, and law school is coming to a close, so I’m about to hopefully get my free time back for a bit.  I laughed so hard about #9 I thought I was not going to make it up the stairs back from the garage.

9.  Then my ironing board, faithful buddy, failed me.  It did this to our daughter (yes, Green Cup Girl) last week, and I really didn’t think much about it.  This time, it was me who was the fortunate recipient of it’s orneriness.  I tried everything I could to get it to fold back up.  I even got a hammer and screwdriver to try to help it help me not hurt it.  It did no good.  I finally sat on it because I was so annoyed and crazy from the weird week I’ve had.  The legs buckled, of course, but that was my goal anyway.  At that point, I just needed it to fold so I could move on with my life.  Cheap piece of junk I purchased from a store we won’t name, but you can guess!

So, here I sit, crazy from the week.  Hope yours was better than mine.