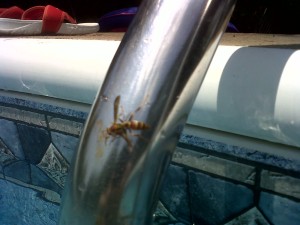 So I have a couple of friends at the pool.  They are pretty small guys, and they really don’t talk or anything.  They just like a cool drink of water now and then.  At first, I thought they were just pesky little creatures trying to drive me away so that all of their buggy friends could come over and party.  Then, one day a week or so ago, I figured out that what they were doing was drinking water I had splashed up on the side of the bars on the steps leading out of the pool.

I had been splashing water up there originally to get rid of the pests, thinking that if I could shoo them away, they would leave me alone.  That way, I wouldn’t have to worry about them coming back and stinging me or such, which would be good as that would make my swimming experience just a little less enjoyable.  Then, I noticed that they didn’t really go away when I splashed the water up on the poles.  They just stayed and sucked the water off the poles.

It’s been really hot outside since May.  We have had so many “over 100 degree” days that I have lost count.  You know it’s hot when the bugs are chancing a swat to drink the water you’ve splashed onto the pool edge!

So, the water-drinking insects, who I now call Jimbo and Harriet, and I have come to an understanding.  I’ll splash water up on the poles if they agree not to sting me.  It’s a symbiotic relationship if I’ve ever seen one.