Ellis Island. For literally hundreds of millions of Americans, we owe this great island and it’s history our very own. Today, I visited it and it gave me chills.

Taking th statue cruises ferry from the Statue of Liberty, we walked on to Ellis Island. The temperature was about 80 degrees, and there was a nice wind blowing the whole time we were there.

Walking inside the great hall, the former baggage area, was awesome. They have a cafe to one side, with many good and even healthy choices for lunch or such. I had the fiah and chips (476 calories) with fries. For the 4 of us, we spent about $50 or so with drinks. Not bad since yesterday’s lunch was $100 at Applebee’s!

We walked around the exhibit halls, taking in the sights – luggage, passports, steamship reservation papers, tons of photos, and artifacts both from the immigrants as well as from Ellis Island’s buildings. They shut down the place long ago, and the whole thing was in great disrepair until the 1980s. Then it was opened as a National Park visitor’s center, which is how it stands today.

The registraion hall gave me chills. Just thinking of all the people who rode over on boats, across the ocean, to enter the promise of the New World in the late 1800s and early 1900s. Thinking of my husband’s grandfather, a steamer stowaway from Austria whose name was shortened when he arrived since it was pretty hard to spell. I stood there thinking of how many friends I have, who might never have even come to be at all, had it not been for the promise of a new hope and the courage they had to cross the seas, with no guarantees they would even make it on the dangerous crossing. I would never have know Sweetie, and my life would be totally different, if at all, had Ellis Island not been there to open those doors of possibility.

My own great-great-grandfather came over in 1885 in a barrel on a ship, another stowaway, to live a new life in America. He landed in Philadelphia, so Ellis doesn’t have the same spirit for me, but nonetheless, it is like hallowed ground. I could feel the presence of so many people, but with such hope as opposed to despair.

We walked around and took quite a few photos. We ate our lunch outside, with views of the Statue of Liberty on one side and the NYC skyline on the other. Eating lunch in my office, or anywhere else for that matter, just won’t feel the same!

No tickets are necessary to get into Ellis Island, but a Statue Cruise tickets will easily get you there. Again, wear comfy shoes. Everything is air conditioned and inside. Lunch can be eaten either inside or out, and the cafe is on the 1st level, east end.

Take your camera. You can also look up your ancestors to see if they passed through the Ellis Island checkpoint, for a nominal $5 fee. It’s free at home at http://www.ellisisland.org. 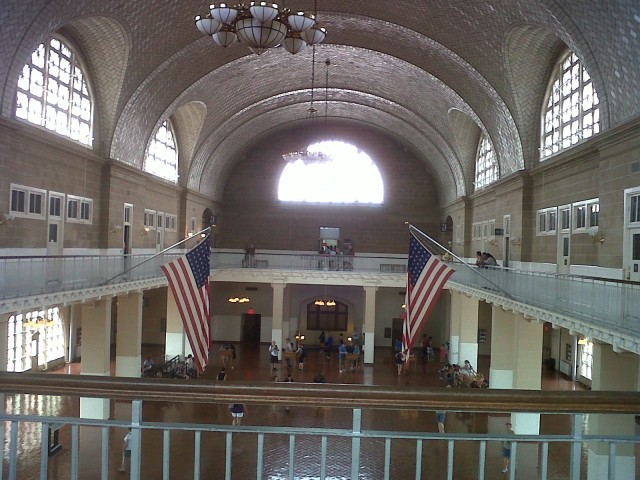